For other uses, see Guacamelee (disambiguation).

Metroidvania
Platformer
Beat 'em up
Guacamelee! is a Metroidvania action platformer inspired by Mexican folklore and culture. Developed and published by Drinkbox Studios, it released on April 2013 for Playstation 3 and Playstation Vita, being ported for Windows on August of the same year.

On October 2017, Guacamelee! 2 was announced for Playstation 4, being released on August of the following year.

Guacamelee! centers around the adventures of Juan Aguacate in his quest to save El Presidente's Daughter from an evil skeleton named Carlos Calaca. Juan must travel between the Living and Dead worlds during the course of the game.

Gameplay is based around the exploration aspects of the Metroidvania genre, exploring large maps while unlocking access to new areas via new abilities. Combat is a blend of striking and wrestling maneuvers, and the player is rewarded for performing multihit combos. Drop in drop out co-operative play is also available.

Guacamelee! Super Turbo Championship Edition is an updated version of the game, a later release that adds new regions, expands some story elements, implement a new ability as well as a boss within one area expansion. 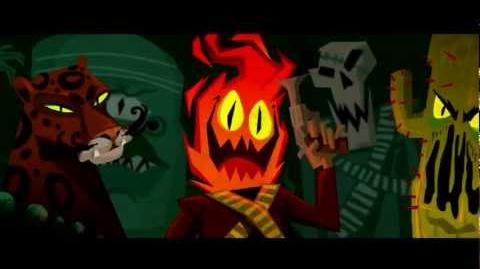 Guacamelee Trailer
Add a photo to this gallery

Retrieved from "https://guacamelee.fandom.com/wiki/Guacamelee!?oldid=5100"
Community content is available under CC-BY-SA unless otherwise noted.